1. Over the past months, the Penang State Govt was unable or afraid to reply to my past statements on the controversial Penang Tunnel project.

2. Questions such as the following have been left unanswered:

a) Why did the state government had allowed the Penang Tunnel Special Purpose Vehicle (SPV) company to pre-sell RM3 billion worth of state land rights even though the roads project is 3 1/2 years late in starting construction,

b) why did the SPV company able to make profits  RM61.5mil from revenues of RM51.8mil in just one year if the RM220 million already paid by the state government to do reports are not 400% overpriced.

c) Did the Penang Govt break established procurement guidelines when awarding the tunnel mega-project to a company which auditors raised significant concerns and paid-up capital was 1,900 times below minimum JKR requirement?

3. Many Malaysians find this surprising as the DAP had said they practice transparency and would normally be quick to defend but this time around, such questions on a RM6.34 billion project using public money has been met with deafening silence from them.

4. Nevertheless, I will continue to ask questions of DAP over this project even though they are unable or afraid to answer.

5.  Sources have provided me with information that the 50 acres of state land on Gurney Drive that the Penang Government had allowed the SPV company to pre-sell for RM2.83 billion to a listed company in a ceremony where the YAB Chief Minister was a witness will form part of a project called the Wellness City of Dreams.

6. This project, which will be 100% privately owned in a joint venture between the listed company and the Penang Tunnel SPV company, was announced to have a Gross Development Value (GDV) of RM15 billion.

7. The layout of this project is as per the diagram below. 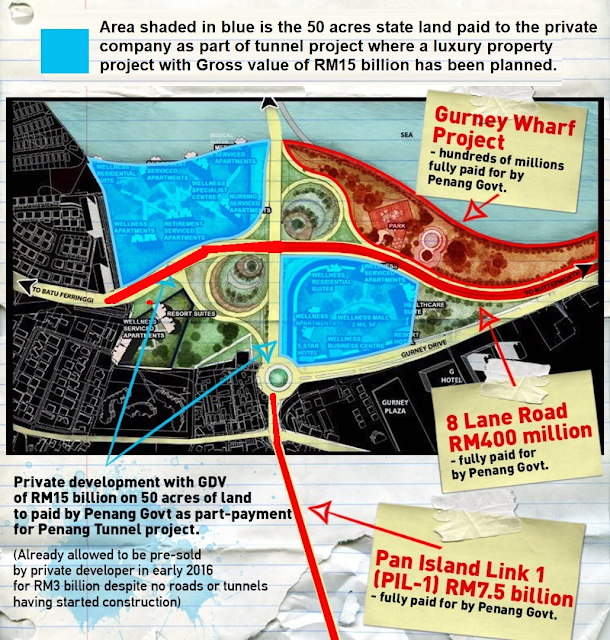 8.  Based on previous announcements by the DAP Penang Government, unspecified "hundreds of millions of Ringgit" of state funds will be used to build the "Gurney Wharf project" next to the City of Wellness project.  The Gurney Wharf project is promoted by the state government to be a major tourist attraction and will have specially-created sandy beaches, waterpark, public parks, skate parks, an a retail Seaside Retail F&B waterfronting public promenade, seafront dining facilities including the island’s famed hawker fare and a pier walk.

The Penang Government had said that they will pay for this Gurney Drive project.

9.  The Penang Government had also said that they will build a 8 lane road in front of this development along Gurney drive that will cost between RM300mil to RM400mil  The cost of building this road was also confirmed to be paid by the Penang State government.

10. Also, the Penang Government had also said that they will be building at their own cost, a 19.5kn Pan Island Link highway that will connect this development to the Penang International airport in a project that will cost RM7.5 billion. At RM385mil per km, this highway will be the most expensive in Malaysia by more than double.

11. It is clear that the Penang Govt is spending close to RM9 billion of state funds that is derived from state land and assets sale on projects that appears to make the RM15 billion GDV Wellness City of Dreams private project to be the main beneficiary.

12. On the other hand, the state-owned Penang Development Corp (PDC) has seen its profits and cash reserves plummet in recent years until it needed an emergency RM609mil soft loan from the state government early this year.

13. Questions are now raised why is the Penang Government seemingly benefitting a 100% privately owned property developer and not allowing the PDC to have a stake in this RM15 billion project - especially since the land that the project is on comes is state land and that the Penang Government is spending up to RM9 billion of state funds in projects that seems to help ensure the success of this Wellness City of Dreams project?

Note to editor: We appreciate if you could print the one and only picture in this post as it provides clarity on what we are disclosing.